The Friends of Rushcliffe Country Park have just completed a new ladybird-themed walk in the Country Park. Set in the woodland area near the top of Fowemer hill and the kite park, the walk features 32 ladybird models representing most of Great Britain’s 45 native species. The new walk was officially opened on 19 January by Rushcliffe’s Mayor, Councillor Marie Males. 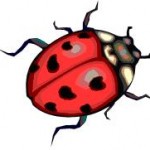 Children can collect a quiz sheet – and a ladybird pencil! – from the visitors’ centre before starting the walk, and then tick off each species as they spot the models. You’ll also find a range of ladybird-themed mementoes on sale at the visitors’ centre, and lots of information about British ladybird species and how they’re under threat from non-native types. Ladybirds are still hibernating at the moment but they’ll be back in the springtime, so why not put a date in the diary for a ladybird walk with your family? As well as the 32 models, you might see one or two of the 12 real-life ladybird species that have been sighted at the Country Park. (Researched & written by Faye Stenson)