Parish Councillors have resolved to remember those from our village who died serving our country with a new lectern at Ruddington’s War Memorial.

It will replace the one already there and will be a “Roll of Honour” to those who fell during the First and Second World Wars and in Korea. The proposal was put forward because the names carved on the War Memorial itself are still difficult to read despite the restoration work that was carried out in 2013. In addition, the current lectern in the War Memorial Garden, which acknowledges Nottinghamshire County Council’s financial contribution to the 100th Anniversary Garden, is said to be in poor condition. 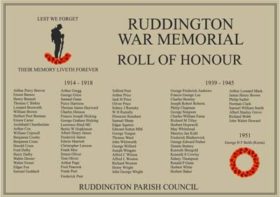 Parish Council staff sourced a quote for the new lectern from “Signs of the Times” in Leighton Buzzard – the company which is already producing our new Village Gateway signs. The cost is set to be £1,297.50. £450 was granted from the Rushcliffe Borough Councillors’ Community Fund and another £300 from Nottinghamshire County Council – making a total of £750. The shortfall in funding of £547.50 is being met from Parish Council reserves. Councillors rubber-stamped the plan at their full meeting on Tuesday 27 June.

It’s promised that the new lectern will be compliant with the Equalities Act 2010 in terms of legibility and ease of access by wheelchair users.