After four years on Church Street, a popular Ruddington cake-making business has moved premises. Julia’s Kitchen can now be found at 14 High Street in the former Gracie’s/Village Café premises, and also has a new shop phone number of 998 4823. 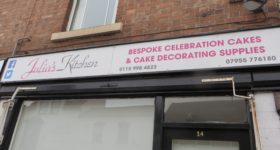 ‘Julia’s Kitchen Cake Boutique’ was the brainchild of entrepreneur Julia Towers who’s worked in catering since leaving school. But it was the cupcakes and birthday cakes that she started making for appreciative friends at home in Clifton that led her to turn it into an online business on Facebook around five years ago.

“Then, a year later, with over 4,000 Facebook friends, orders from all over the country and my kitchen always upside down, I decided I’d better look for separate premises to make and decorate my cakes,” says Julia. “And a shop came up in Ruddington where I could bake on site and also get passing trade.”
Now, since Julia and her award-winning team have outgrown their original premises, she’s seized the opportunity of moving to the much larger shop on the High Street when it became vacant.

Her plan is not only to expand the existing range of products on offer, but also to create a shop that sells absolutely everything for the budding and experienced cake maker – and to run cake-making courses on site, too.

You can keep up-to-date with developments on the Julia’s Kitchen Twitter and Facebook pages.
Graham Wright/ Barbara Breakwell