A new era began at the Victoria Tavern in November when former White Horse landlady, Lindsey Flint, moved in. The latest in a series of ownership/management changes amongst Ruddington pubs, it’s hoped that the new tenancy at the Vic Tavern will help to transform its fortunes, which have been somewhat mixed in recent years.

‘I’m focusing on a traditional, village pub offering,’ says Lindsey. ‘My aim is to provide quality real ales and wines at great prices, and a welcoming environment for Ruddington people to socialise with their friends. I’d like to offer something a bit different from the other six pubs and cater for what my target customers are looking for.’ 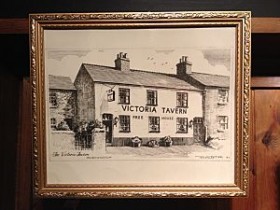 Lindsey has already implemented a couple of policy changes since taking over the Victoria Tavern, with no under 18s now allowed in the pub and dogs restricted to the bar side only. And she’s relishing the opportunity to put her own plans in motion for the Vic, as she takes on the role of tenant rather than landlady for the first time.

A new food menu is on the cards for the New Year, featuring a range of home-cooked pub classics. Steak Night will return to the Tavern after several years’ absence, along with a second themed food evening. In the meantime, customers can enjoy a selection of cobs and snacks, with mushy peas and mint sauce served on Friday and Saturday evenings.

However, with her target audience firmly in mind, Lindsey is especially keen to reinforce the Victoria Tavern’s reputation as a quality real ale pub. Customers can expect to see more cask ales behind the bar in future, with plenty of guest beers to add variety. With the brewery’s support, Lindsey is also hoping to take part in the 2014 Ruddington Beer Festival.

‘It will be a challenge to get the Victoria Tavern back to its former glory,’ says Lindsey. ‘But I’m really enjoying getting stuck in. It’s great to be working with Rob again (Lindsey’s former Assistant Manager at the White Horse) and we were delighted to welcome Jade to the team a few weeks ago. I’d like to thank all my customers, past and present, for their support. Everything’s going very well so far – long may it continue!’