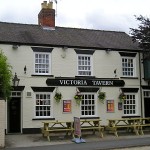 After a two week programme of refurbishment, Ruddington’s Victoria Tavern reopened for business on Friday 17th August. It’s part of the Enterprise Inns’ chain and has been relaunched as a “Beacon Pub” with a focus on competitively priced beers and lagers.  Manageress Jo Simpson was keen that the makeover shouldn’t destroy its character: “I asked for them to keep it as a traditional country pub.  But it did need smartening up so, as well as repainting, we’ve had all the seating reupholstered, new carpets and some new furniture.  There’s now less difference between the Public and Lounge Bars – both are just as comfortable!” 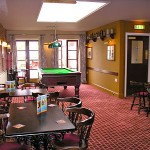 In fact the decision to concentrate on drink rather than food means there’s been space to add a new pool table and games machine to the back room.  But the TV has been banished to the Public Bar only, which has pleased some customers. For real ale lovers there are also still FOUR handpumps at the bar – dispensing the ever popular Bass, plus changing guest beers, at discounted prices.
“We’ve had a really busy first couple of weeks and we hope people will keep coming” says Jo.  “There’s Karaoke on Wednesdays, a ‘60s, ‘70s & ‘80s Disco on Saturdays and a Quiz Night on Sundays.  We’re also hoping to launch a Pool League at The Vic”.
So next time you’re out on Wilford Road make sure you give The Tavern a try!
(By Graham Wright)

A new healthcare service arrived in Ruddington last month when Castle Clinic on High Street expanded its offering to include osteopathy. Registered osteopath and professional sports massage therapist Richard Moore will provide a range of treatments at the Clinic, with appointments available every Tuesday between 9am and 1pm.
Osteopathy uses an established system of clinical diagnosis and manual treatment to treat conditions such as sports injuries, lower back pain, sciatica and frozen shoulder. Richard, who lives in Wilford, launched his new services on 14 August and is already in demand. ‘There was definitely a gap in the market for an osteopathy service in Ruddington,’ he says. ‘I’m looking forward to helping patients of all ages in the village lead a more pain-free life by treating a wide range of muscular injuries and joint problems.’
Local sportspeople will be interested to know that Richard is also qualified in the Kinesio Taping Method, a type of sports taping that helps traumatised tissue to heal rather than simply immobilising the joints.
To book an appointment with Richard, call the Castle Clinic on 0115 921 1455 or visit www.castleclinic.co.uk.
(By Faye Stenson) 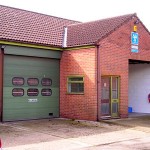 Following the sad news in our July issue that Hall’s Garage in Ruddington had closed, we are pleased to announce that Jason Dickman is to reopen the MOT Test Centre there by the end of September. The large adjoining workshop should also be back in use shortly afterwards as a service and repair centre. Jason is the son of site owner Brian Dickman and actually used to work there as a mechanic in the 1980s – before Hall’s took a lease on the premises.  Now Jason has returned and initially plans to employ two other staff in his new business – trading as “Ruddington Garage”.  Brian is planning to semi-retire and transfer equipment from his own B.D. Cars on Kempson Street back to the Easthorpe Street site. However father and son have no plans to reopen the car dealership – so new tenants are still being sought for the showroom.  Watch this space!
(By Graham Wright)