It’s been announced a new skatepark will be built at Rushcliffe Country Park by next spring – to replace the current wooden structure there which is now reaching the end of its useful life.

Rushcliffe Borough Council (RBC) has advertised the contract to construct a bespoke concrete facility, which it promises will be designed in close collaboration with the young people from our village who will use it. It’s envisaged the replacement skatepark will meet the needs of future Olympic skateboarders and BMXers from Ruddington and the surrounding areas.

The planned completion date is April 2021 – when it will join other, similar, new RBC facilities including ‘The Hook’ skatepark at Lady Bay, which opened in May 2019, and Radcliffe-on-Trent skatepark, which opened earlier this year. It’s hoped by then that the current social distancing requirements on such areas will have been relaxed.

You may not realise that Nottingham and Nottinghamshire are among the original homes of UK skateboarding, boasting a 50-year history in the sport. Our area may even be represented in the 2021 Tokyo Olympics next summer by local professional skateboarder and Skateboard GB team-member Alex Hallford, who grew up skating the current wooden skate park here in Ruddington along with the one at Lady Bay.

RBC, alongside social enterprise Skate Nottingham, science education charity Ignite! Futures and Nottingham Trent University, will get young people to co-design the new facility at Rushcliffe Country Park. This will be achieved through a series of workshops aimed at local 11 to 18 year olds as well as older skaters and BMXers, facilitated by academic experts in architecture, engineering and sports science and mentored by university students – supported by a grant from UK Research and Innovation (UKRI). 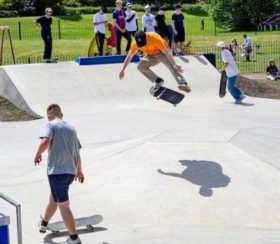 RBC reveals the new Ruddington skatepark will have “…a ‘plaza’ style layout simulating the street furniture favoured in modern skateboarding along with beginner-friendly features, elements designed for BMXers, and materials and sustainable approaches to construction that are sensitive to the Country Park setting.”

James Hope-Gill, Chief Executive of Skateboard GB, says: “It is great to see that Rushcliffe Borough Council has a dedicated budget for skateboarding facilities and has really thought about the design of each of their parks individually, rather than duplicating the same forms in each. The existing parks at Lady Bay and Radcliffe have already proved that, with forward thinking and involving the user community from the outset, it has led to two amazing skate parks which are hugely popular for all wheeled users.”

The workshop participants’ film, audio recordings, drawings and models will all be exhibited interactively during the 2021 Festival of Science and Curiosity from February 10th-17th, which will be followed by the completion of our new skatepark in Ruddington.

RBC Deputy Leader, Councillor Debbie Mason, says: “It’s heartening to see another wonderful skatepark set to be further developed for thousands of current and future skateboarders to enjoy, building on the success of new sites at Lady Bay, East Leake and Radcliffe-on-Trent in the Borough.”

She adds: “The concept here at the Country Park again incorporates the chance for those who enjoy the sport to add their creative influence into its final design. The future workshops I am sure will really help engage local skateboarders, creating another site they will make their own and a place they can feel proud that they helped shape.”

If you’d like to get involved in these design workshops, you are asked to email info@ignitefutures.org.uk or contact@skatenottingham.co.uk.