To start off 2013, we’re pleased to report permanent new faces at both of Ruddington’s Wilford Road pubs!

The Victoria Tavern has youthful husband and wife team, Johnney and Lindsey Fahey taking on the lease – with the hope of restoring its reputation as a friendly, traditional, country pub. And they’ve brought along an additional attraction in the shape of Black Labrador puppy Millie – who’s already been a big hit with the regulars! 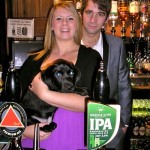 Lindsey previously worked as an Events’ Manager but has wanted to pull pints at her own pub ever since she was a girl, and loved the Victoria Tavern as soon as she saw it. Former builders’ merchant, Johnney was instantly attracted to Ruddington by the distant sound of steam trains – but has had to learn quickly how to keep a good pint. So far so good: Four competitively priced real ales are in the handpumps with further discounts for CAMRA members. Look out for Millie’s very own beer in the bar soon! The pool table has already disappeared in favour of a quieter lounge area with extra tables where a good menu can be offered. The current range will be expanded during January, when new kitchen facilities are installed, and Lindsey herself will be chef: “I’ll be cooking locally sourced food whenever possible and my traditional mixed grill is a bit of a speciality. But we’ll be having other ‘themed’ events including Tuesday Steak Nights and offering a cheaper day for pensioners. We’re hoping to run a quiz night too.” Meantime, Johnney is making sure fellow sports fans are catered for with Sky TV in the Public Bar, showing all the football, plus an additional screen in the lounge to be used only occasionally for other major sporting fixtures. With your support, they’re certainly planning to be here to stay! 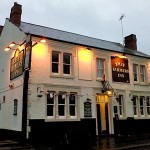 The Jolly Farmers is back in business again after another period of closure. It reopened its doors on 21st December with mother and daughter team Carol Connelly and Hayley Fisher now behind the bar. Carol is an experienced publican who once ran The Star in her home village of Gotham. She’s come back to our area after a spell in Sheffield and is looking forward to the challenge of turning “The Jollies” around. Music will be a major theme at the re-launched pub with a Friday night disco and singers on Saturdays – leading to larger tribute acts if all goes well. Two real ales are available on handpumps and it’s planned that food will be back on the menu very soon.

“We’re making sure it’ll be a friendly atmosphere in a family run locals’ pub” says Carol “and we’re also lucky to have a good sized function room for meetings and private parties which people can book. So please come in and give us a try!”
(By Graham Wright)