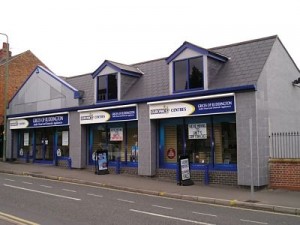 After over a century of trading in the village ‘Grices of Ruddington’ no longer will be – as they close their Wilford Road shop this month to move to smaller premises in West Bridgford.  It brings to an end a chapter of history beginning in 1909 when Reuben Grice founded his business on the site repairing bicycles and MOD vehicles – and this has evolved into what it is today. In the nineties, when Hartley’s Electrical closed down, the Grice family decided to concentrate exclusively on audio & visual and domestic appliances.  Now Reuben’s great grandson, Steven Grice, has decided it’s time for a move and another new focus.

He told us: “I would very much like to clarify that Grices are still continuing as a business. All the staff are moving with us and we will offer the same level of service of which we pride ourselves on.  We are relocating to Unit 5, Compton Acres, which is a smaller store but in a busier location with more passing trade. We are also going to put a lot of focus into an eCommerce website with hundreds of Euronics special offers available to purchase online or simply order instore”.  He continued “It has been a difficult decision to move Grices but over the last few years the trade has got tougher and tougher with the supermarkets now selling electrical goods and with how the internet has become a massive target for purchasing.  It has eroded the profit margins in our trade.  The security of signing a fifteen year lease with Sainsbury’s is just something I couldn’t turn down. It gives long term stability to our company, which hopefully makes us stronger and even more competitive in the market.  I wish to thank all our customers for their support over the years and hopefully they will continue to deal with us at our new premises.”

The news of a Sainsbury’s ‘Local’ store moving onto the site has created a flood of both positive and negative reaction from villagers and other businesses. The Planning Department at Rushcliffe Borough Council has advised us that there is no necessity to obtain planning permission for any change in retail operation on what are already “A1 use” premises.  However Sainsbury’s will need to apply for a liquor licence if it is to sell alcohol.

Meantime Grices are set to move out of their Dutton’s Hill home by the 20th of September – with Sainsbury’s expected to be trading there by Christmas.
Researched & written by Graham Wright

For a history of the Grice family click here