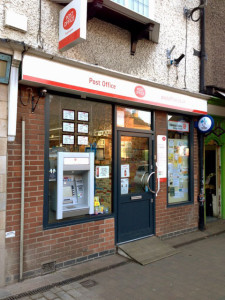 Anyone who regularly posts a letter on High Street will have realised that our treasured red pillar-box suddenly “disappeared” from the pavement outside Ruddington Post Office in February. This was to accommodate the preferred location for a very welcome new cashpoint (pictured) to replace the facility lost after the closure of Barclay’s Bank. 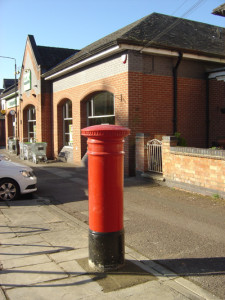 Unfortunately the plan to simply move the pillar-box to the other side of the door proved to be flawed – after electrical cables were discovered under the pavement!

Since then a frantic search has been on to find a suitable new site.   An even more traditional pillar-box (not our original) has been installed by the bench near the Co-op on Church Street but as at 4th April is not yet in use. Of course you can still post mail inside the post office during trading hours.

Another new structure on Church Street has “appeared” next to the bus shelter outside the church (pictured). This large black box, which 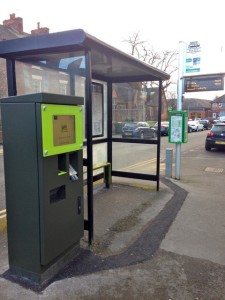 looks rather like a free-standing cashpoint, is in fact a new way of paying our bus fares! It’s where you can purchase and top-up the new Robin Hood Smartcard for discounted pre-paid travel on Nottingham City Transport, Trent Barton, Kinchbus, Linkbuses and the NET trams (including bus, tram, park and rides).

The card itself is free of charge but requires a minimum £10 top-up. It can be used for all journeys within the designated “Greater Nottingham” boundary, which includes Ruddington. Unfortunately this machine does not take cash, so you will need a credit or debit card to boost your balance. But bus drivers will still be happy to accept your “real” money!
Graham Wright