Nigel was a school governor at St Peter’s Junior School for 12 years and was actively involved with school life, building raised beds for vegetable-growing, and starting and then running a school gardening club. He helped on several residential trips and became known to the children as ‘Mr Nigel’.

A keen oil-painter himself, in 2016 Nigel was instrumental in initiating the Chapel Art Gallery in the village, by setting up a collaboration between the Framework Knitters Museum and the Nottingham Society of Artists. This has so far enabled 12 artists to exhibit their works in Ruddington. 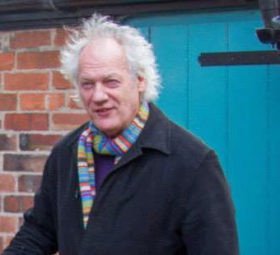 Before retiring to pursue his art, which also included several sculptures, Nigel had a long career as a research scientist,  achieving an international reputation for work in inflammatory bowel disease at pharmaceutical companies including Wellcome and Astra Zeneca in Loughborough.

Nigel’s kindness, humour and generosity will be greatly missed by his wife Penny and their two daughters Martha and Rosie, by his large extended family, and by his many friends and colleagues in the village and beyond.

Nigel’s funeral took place on Wednesday 27th September at Wilford Cemetery. If you’d like to make a donation to Action Aid in his memory, please contact Co-op Funeralcare in West Bridgford on 0115 981 7444.