21 year old local resident, James Shaw, is a very enthusiastic and determined young man who I had the pleasure of meeting recently.

Born with Cerebral Palsy, James tried various sports before identifying tennis as his passion. Over the years, he has developed his skills and is now on The Tennis Foundation’s Performance Development Pathway and is aiming to compete in the Tokyo 2020 Paralympic Games.

In September this year, he was fortunate to be selected to go to the Rio Paralympics as part of the Paralympic Inspiration Programme. The programme helps to excite and inspire potential Paralympic athletes, whilst providing them with the knowledge that will prepare them for future Games.

After his visit, James said: “The Paralympics is an absolutely amazing experience that I need to do everything in my powers to get to.” 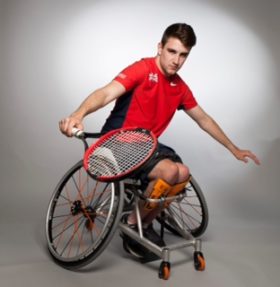 Last year, Nottingham Building Society began supporting James through the SportsAid programme and he much appreciates their continued support. With their help, he has recently acquired a hand-bike which attaches to the front of his wheelchair and affords him increased independence. It also supports his tennis training, as it helps develop his shoulder strength as he propels himself along.

This year, James has competed in 15 competitions at home and abroad, and has reached number 15 in the World Rankings. Such is his commitment to his sport that he even played in a competition in the Czech Republic on his 21st birthday in June. He has also been crowned National Champion 3 times (1 Singles and 2 Doubles titles).

James was also recently a runner up in the Young Sportsperson of the Year at this year’s Nottingham Sports Awards. In the New Year, James takes on a new role as a mentor for “Beyond the Baseline,” a three year programme which aims to inspire young people and help them fulfil their personal potential.

He is definitely an inspirational individual and a name to watch out for in wheelchair tennis.

If you’re interested in following James’ progress towards Tokyo, you can find his Facebook page by searching for “James Shaw Wheelchair Tennis” online.