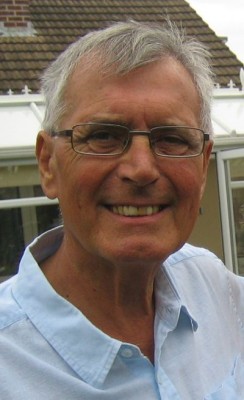 If you, like millions of others, watched Usain Bolt in the 100 metres final at the recent Olympics,  did you realise Ruddington was represented at the starting line as well?  John Hallatt, who has lived in the village since 1965, has spent his life balancing his career as an architect with his passion and enthusiasm for athletics. This dedication to the sport was rewarded when he was selected to be an official at the recent Olympics.
Since his early introduction to sprinting at High Pavement Grammar School, he has always been involved in athletics.  He was a coach at the Ruddington Athletics Club which used to meet on the area of land now used by the Colts Football Team at Elms Park.
The area, which was only big enough for a 300 metre track and had an old garden shed as a clubhouse was nicknamed “The Field of Dreams” by John. True to its name it nurtured very successful local talent before closing in the 1990s and merging with a road running team based in Bingham, to become Rushcliffe AC.
John said that the Olympic Stadium was another “Field of Dreams” and that, as he stood waiting for the start of the 100 metres final, his thoughts were “This is a long way from Bestwood!”  Apparently the noise of the 80,000 strong crowds didn’t even register with him as he concentrated on making sure the rules were adhered to and fair play ensued.
John has memories galore of the people he has met through his athletics involvement including encouraging a young Somali boy who he met in Birmingham to “Do his best”. 16 years later that boy won two gold medals; it was Mo Farah!
John intends to carry on “putting into” the sport and to encourage and educate younger officials.  Not content with the early mornings and late nights of his time at the Olympics, he will be at the Paralympics to do it all again.
Ruddington is as proud of John as John is of Ruddington.                            (By Barbara Breakwell)