Last month, the popular café and cocktail bar Apotheka closed its doors for good, much to the disappointment of its many fans in Ruddington. It’s yet to be revealed what will happen to its former premises at 6 Wilford Road, but we do know that the other business that traded there, McCartneys Catering, will be moving to a new home. 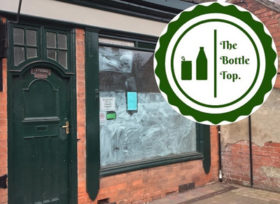 Meanwhile, there’s brighter news for Ruddington drinkers as a brand new off licence called The Bottle Top could soon be opening at 2 High Street, formerly Glyn Thomas’ greengrocers which closed unexpectedly in 2018.

Owned by Anthony Preston, The Bottle Top plans to sell craft beer, cider and premium spirits. In addition – and partly in homage to the building’s former tenants – Anthony is also planning to sell a range of artisan foods including fruit and vegetables, baked goods, honey, preserves and coffee.

Assuming a licence is granted, the shop at 2 High Street will open in early April. In the meantime, The Bottle Top’s wares were on sale at the second Ruddington Village Market on Saturday 2nd March, so some village residents have already had a sneak peak!

With thanks to Graham Wright and RUDDINGTON.info