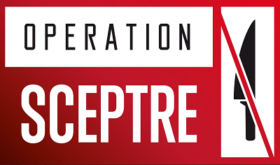 During the week commencing 15th November 2021, additional Operation Sceptre patrols were deployed in Ruddington and other areas of Rushcliffe as part of a national campaign to target knife crime.

On 18th November, local Neighbourhood Policing Officers were on patrol when they sighted and stopped a vehicle which contained two persons. The officers located a lock knife in the driver’s door pocket. One male was subsequently arrested and later charged with possessing a bladed article in a public place.

Across Nottinghamshire, 60 knives were taken off the county’s streets and 14 arrests were made. Of the 60 knives, 51 were handed in at amnesty bins and 9 were seized by officers.