This football season a lot of media attention has been focused on a certain Premier League football team just down The Fosse Way.

But you need look no further than our own village for an amazing story of soccer success. Ruddington Village FC are the Notts Senior Premier Division Champions! And The Black and Yellows, like The Blues, clinched the title even before the last games were played…

Midfielder Leigh Sissons told us: “This season has been unbelievable. We were competing against teams who were paying players and also had a lot of financial support from sponsors. Last season we finished mid table and struggled to find any real form. 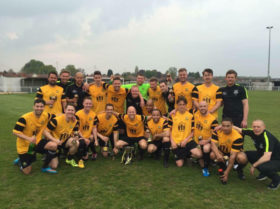 This season we signed new players including goal keeper Luke Edge, attacker Danny Cocks and defender Kieran Josef. We started the season with a belief that not only did we have a strong squad, but we also had the quality where it was needed.”

Manager David Rimmington said “I took over Ruddington FC when they had just been relegated from the Premier Division and, on the first attempt; we won the league and were back in the top division.

Over the past 6 years we have grown in strength and attracted new players as well as keeping the core of the squad who have been with us for many years. This season showed how far we have come over the years. We were competing against some big clubs but, for the first time in the club’s history, we won the Notts Senior League Premier Division. A huge thank you to my assistants Michael Leslie and Aidy Osbourne, as well as Steve Wilson who has continued to support the club and work wonders behind the scenes.”

Anybody wishing to discuss sponsorship deals for next season is asked to get in touch by emailing leighsissons@hotmail.com.

Meantime the only disappointment for our title winners is that they will still be playing in the same division next season because the current football ground does not have all the facilities required to play in the next division up.

They would need to get floodlights and barriers around the pitch. Moving out of Ruddington and ground sharing with another local team would be the only other option. Ruddington Village FC says any help or advice would be appreciated – to see if anything can be done.