Sadly the Winter Olympics in Russia finished without a medal for Ruddington ice dancer Penny Coomes and her partner Nick Buckland.

After winning the British Championships for the last three years, and then the Bronze medal at the 2014 European Championships in Budapest, they were on a high heading to Sochi. But, speaking to the Ruddington Village Newsletter before the trip, Penny was being realistic about what they could achieve this time against more experienced, world class competition: “We are hoping to prove ourselves this year as contenders for a medal in 2018.” 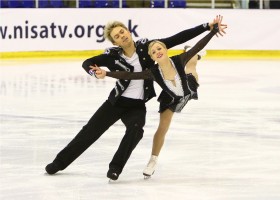 As it turned out, the duo did themselves and Team GB proud – with a very respectable tenth place overall – ten places higher than they achieved at their first Winter Olympics four years ago in Vancouver. And many fans thought they deserved to have done even better after their three impressive routines – including their show stopping free skate to a medley of Michael Jackson songs.

Afterwards Penny Tweeted: “Just want to say a HUGE THANK YOU to everyone who has supported us! I have the best family and friends in the world! Love you all!!! … This week I got (to) live my dream!”

She and Nick also added a special word of thanks to their Nottingham dance choreographer Gareth Woodward “for teaching us our Michael Jackson moves!! We loved it!!”