Last month we ventured out of the village centre to begin a journey of discovery – of lesser known businesses away from the busy high street that are also vital for local employment and our region’s economy. This month we continue at the southern boundary – calling in at Ruddington Fields Business Park.
Most village residents will know that this site was reclaimed from a World War Two MOD depot which was decommissioned in 1983. 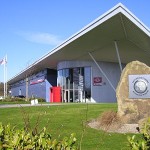 Over 200 acres were redeveloped as our Country Park – which was opened in 1993. But 38 acres were earmarked for business use – and the number of companies which have moved onto the site over the last twenty years may surprise you!
One of the most high profile is Experian – given a royal seal of approval last year when The Duke of York flew in by helicopter to
see the huge data centre at work and praised the company for developing innovative ideas.  Welcome Financial Services is also a major employer, at Britannia House, whilst independent christian bank, The Kingdom Bank, now has its headquarters here alongside Salt Insurance, Assemblies of God Inc and the AOG Property Trust.  Nottinghamshire County Council administers its employees’ pension funds from Oak House. Capita IT has chosen to have one of its 15 UK offices in our business park whilst ERGO promises “full-scale ICT solutions”.  Telecom equipment and systems giant NEC also has a base on Mere Way. Medical firms include Quotient Clinical & Bioresearch and Pharmaceutical Profiles.  Greene Tweed offer “sealing solutions for the most extreme environments” – manufacturing components for the aerospace, oil field, petrochemical processing, semiconductor and solar industries.  And there are dozens of other smaller businesses, too numerous to mention, renting office space and carrying out their trades within many of these state-of-the-art buildings!
Finally, Ruddington Fields Business Park also has a big role in education – The National College for School Leadership is based at
Limehouse.  But one of its biggest boasts is EMCAT – incorporating South Nottingham College and the East Midlands’ Centre
for Automotive Training.  For over 15 years this has been creating the mechanics of tomorrow with help from The GM Academy, The Honda Institute and other partners.  And, only last month, the new Kia Academy opened there – which has not only four workshops and seven training rooms but also a replica Kia Showroom to focus on the sales’ side of the business!  They plan to train more that 700 apprentices there over the next ten years.
So there really is much more to Ruddington than initially meets the eye – and we’ll unearth even more surprises next month! (By
Graham Wright)