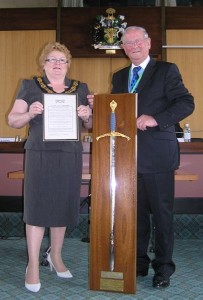 An ornate limited edition sword, produced to commemorate the 50th anniversary of the end of World War II, has gone on public display at County Hall. The Wilkinson Peace Sword was presented to Notts County Council by Cllr. Reg Adair on behalf of the Ruddington and District Branch of the Royal British Legion at the last Full Council meeting.

Since being presented with the sword in 1995, British Legion members had put it on display at various locations in the county but it has been out of public view since Octobe last year when members could not longer find a suitable location.

They approached their local member, Councillor Adair, who arranged with the County Council’s civic office to have the sword placed on display in a showcase near to the reception area at County Hall.

The sword was manufactured by Wilkinson Sword Ltd as a limited edition to mark 50 years since VE Day. The stand includes a quotation from Winston Churchill, “1945-1995 The price of freedom is eternal vigilance”.

Chairman Cllr. Carol Pepper received the sword on behalf of the Council. The Chairman said “The Wilkinson Sword is a beautiful piece of craftsmanship and deserves to be on display for the public to see. I am delighted that the County Council has been able to assist the Ruddington Branch of the Royal British Legion to make this happen.