Following recent correspondence and reports of incidents involving cyclists and pedestrians, the Parish Council’s Environment and Policy Committee discussed the issues of cycling safety and courtesy on the congested village streets. We noted that almost half of the responses to the Traffic and Transport survey question “is cycling on the pavement a problem?” said “yes”. There is a recent report of an elderly person being knocked over. 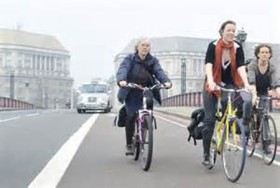 Ruddington Parish Council wishes to promote cycling as an activity with benefits. We seek further and better cycle tracks for example. However, there appears to be a view that cycling on the footway (pavement) is not an offence. It is, and the police can use Fixed Penalty Notices against offenders. Common sense informs us that a small child riding slowly is not an issue, and some cyclists seeking the sanctuary of the footway from the cars and lorries in the centre of the village do respect the pedestrian. A few don’t unfortunately.

The police are supporting us so whilst we hope that enforcement action will not be necessary, it will be used where deemed necessary.

The following letter has been received and is reproduced in full.

“I wish to respond to Sue Powdrill’s article in Issue No.73 of February 2016, concerning her perspective of the relationship between cyclists and pedestrians.

While I can understand her frustrations in relation to pedestrians not being aware of cyclists when crossing the road, I would like to express my concerns about cyclists riding on the pavement.

I regularly witness cyclists riding on the pavements around Ruddington. In particular, I am getting very frustrated at a number of cyclists who insist on riding along the pavement on Wilford Road. The County Council spent a considerable amount of tax payers’ money on providing a cycle track to the West side of Wilford Road as far as Sellors’ Field. The cycle track then crosses over to the golf course side of Wilford Road as far as Wilford. Some cyclists however persist in cycling on the opposite pavement to the risk of pedestrians, in particular young children.

These cyclists are adults riding at considerable speed with little or no respect for pedestrians. When approached they tend to become very hostile.

“In response to Sue Powdrill’s article, the Editor rightly made the point that cyclists should be aware of pedestrians and follow the Highway Code. I would go further and remind the cycling community that it is not only dangerous to cycle on the pavement but also illegal. Please refer to the Highways Act for confirmation.

Any further correspondence on this issue will be shown on the Parish Council’s Facebook page and not in the newsletter. Editor

Cycling on the pavement

The police are responsible for enforcement. A fixed penalty notice (£30) is used for minor offences (effectively a warning shot). However, the Road traffic Act 1991 equates serious cycling offences to the motoring offences of dangerous driving and careless driving. The maximum fine for dangerous cycling is £2500 (perhaps for knocking someone over) and £1000 for careless cycling.

How do I report it?

RPC is keen to know of any incidents where pedestrians, cyclist and other road users are in conflict. As we have said above, the responsibility for enforcement of matters to do with cyclists rests with the police and they tell us that they are keen to hear of any particularly dangerous behaviour. Some examples have already been shared. The prevailing view is that whilst applying common sense, some cyclists use the footpaths in a way that is dangerous to others, and particularly to small children, the elderly, and those with some physical or sensory impairment.

What about children cycling on the pavement?

Common sense means that if the child is safer on the pavement than on the road, and is not cycling at a reckless speed, then there is not a problem. The police will use discretion and if necessary have a word with any parent whose child is causing a problem. Children under 10 years can not be prosecuted in any event. RPC makes it clear that the concerns raised with us are for the safety of children, not about children cycling on the pavement.