Villagers who stayed up through the early hours of Tuesday 20th February to watch Ruddington ice dancer Penny Coomes and partner Nick Buckland skate their hearts out for Team GB in the finals at the 2018 Winter Olympics in PyeongChang were rewarded with another wonderful performance at the Gangneung Ice Arena.

After sailing through the previous day’s Ice Dance to qualify, the duo found themselves up in the Bronze Medal position after their Free Dance routine – choreographed by Nottingham ice skating legend Christopher Dean along to music by rock band Muse. Sadly their scores weren’t good enough to keep them there – but they finished a respectable 11th, in what could possibly be their final Olympic outing. 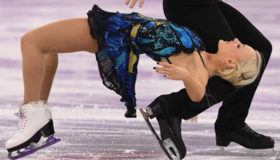 South Korea is the third trip to a Winter Olympics for our local duo – having also represented Team GB at Vancouver in 2010 and Sochi in 2014. But their achievement in 2018 was all the more astonishing because it was only in June 2016 that Penny smashed her right kneecap into eight pieces after a serious fall. The major knee surgery that followed threatened to bring her skating career to a premature end. But “grit, resilience and determination” have seen Penny fight her way back to the top of the sport alongside Wilford’s Nick Buckland – her partner on and off the ice.

In a message to their fans, Penny said: “Sometimes things don’t go the way you want them to –  the last year and a half has definitely taught me that… But I have also learnt that beauty blooms in adversity. After I broke my knee, during my road to recovery I envisioned what my Olympic Moment would be, and while I am so proud of what Nick and I put out there, the result wasn’t what I had hoped for. I wanted to be an inspiration for young people around the world and I am so grateful that the Olympic stage allowed me to share my story and to inspire the next generation. I am deeply humbled by the overwhelming amount of messages I received, and I want to say thank you to you all for making my Olympic Moment so special, and for making me feel so proud… and to me, that’s beautiful.”

Whatever happens next, our local pair can be immensely proud of all they’ve achieved!