Congratulations are extended to Jean Greenwood on recently being named as the Police Volunteer of the Year. This is in acknowledgement of nearly two decades of involvement with the Police. 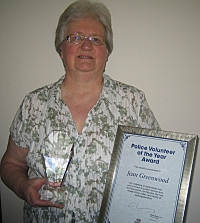 Jean currently serves Nottinghamshire Police as Lead Volunteer for Rushcliffe where she works alongside the Rushcliffe Neighbourhood Policing team. She has played a vital role in collating the voice of the community via community surveys which allowed uniformed police staff to conduct other community duties. Jean has been described as the volunteer equivalent of ‘Dixon of Dock Green’.