Did you know that a major train restoration project is currently underway at Great Central Railway (North), based next to Rushcliffe Country Park? Named ‘Project Miller’ after Terry Miller MBE, who developed the concept of the High Speed Train (HST) as we know it, the project is working to restore prototype HST Power Car 41001.

The restoration of 41001 is being undertaken by the 125 Group, a band of train enthusiasts with a special interest in the InterCity 125 fleet. With the fleet now nearing the end of its working life, the group’s attention is increasingly focused on preserving these trains, which were built between 1975 and 1982 and are still the world’s fastest diesel-powered trains. 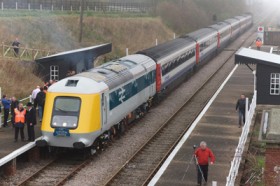 In 2012, the 125 Group struck a deal with the National Railway Museum in York to take HST Power Car 41001 on long term loan, with a view to returning it to working condition. The train was taken to East Midlands Trains’ Neville Hill Depot in Leeds for initial restoration works. It was moved to GCRN in September 2013, where the vehicle’s restoration and commissioning into service will take place.

Work is going well and in November 2014, history was made when 41001 worked as a passenger train for the first time in 38 years, powering a section of The Screaming Valenta charity special rail tour, along with a second power car and six current East Midlands Trains HST coaches.

Project Miller’s success has been widely recognised within the rail industry and rail heritage media. In February 2015, the project team was proud to accept the Morton’s Media (Rail Express Magazine) Modern Traction Award for the ‘The overhaul of the prototypes of arguably the most successful form of British traction ever, in the form of the prototype High Speed Train power car, which has recently hauled a production Class 125 set on the Great Central Railway (Nottingham).’

The award was presented at the Heritage Railway Annual Awards Dinner at the Museum of Science and Industry in Manchester, on Saturday 7 February 2015.

Another recent development is the 125 Group’s purchase of three Mk3 coaches that are now stabled at GCRN. The three cars consist of standard open 12092, first open 11074 and restaurant first buffet 10206. After some remedial work, they’ll become part of GCRN’s general operating fleet and will be re-liveried. The Mk3s will work with the air-braked Mk2 coaches on passenger trains hauled by 41001 and the other locomotives on the railway.

And in the last few weeks, 41001 has made a return visit to Neville Hill in Leeds, where it spent a few weeks undergoing specialist engineering works. The power car arrived back in Ruddington on Friday 17 April, where restoration work continues.

You can find out more about Project Miller, including how you can support the restoration work, at www.projectmiller.org.uk. Or, if you fancy getting your hands dirty, why not get involved in the restoration activities yourself? Visit www.gcrn.co.uk for details.