With seven pubs in Ruddington (EIGHT if you count The Nottingham Knight!) we’re often reporting changes to our licensed premises here in the village. 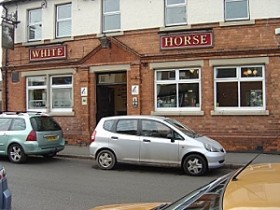 This month remodeling takes place at The White Horse to make it a more ‘family friendly’ and food orientated inn. And you can’t fail to have noticed The Red Lion’s recent striking external makeover (see photo) to complement an ongoing internal refurbishment programme. 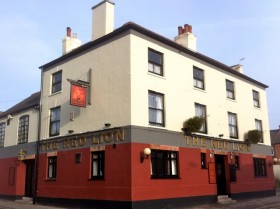 But, subject to consent, plans are also afoot to make some structural changes to The Bricklayers Arms – with the new owners wishing to enlarge the public bar and to create a more extensive, comfortable and private outdoor seating area for its customers.

What’s got the most people talking so far, however, is the proposal to change the historic name of “The Jolly Farmers Inn” on Wilford Road to “The Ruddington Arms.” The plans only came to light when Scottish & Newcastle applied to erect new external signs – under this new name! 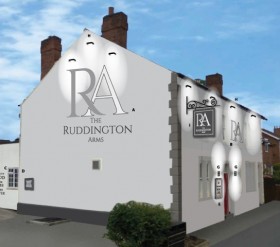 Feedback was swift but mixed on Ruddington’s Facebook and Twitter sites. Dylan Wilson said “Great idea! Sounds friendlier! And I love how the name relates to Ruddington.” Jessica McGowan posted “It’s plenty big enough to be a proper family friendly pub if someone commits to it. The name really doesn’t matter.”

However the majority of comments were against the name change. Sue Lees’ reaction was typical: “Why would a name make you use the pub? Get the ambience right and atmosphere then it might just work. It will all ways be the Jollys. Just leave the name alone!!!!”