The Recognising Rushcliffe Awards 2016 grand final was held on 16 November at the Becket School. The event was organised by the Nottingham Post in partnership with Rushcliffe Borough Council. It was attended by the finalists that had been nominated in seven categories to celebrate Rushcliffe residents who go the extra mile to make the community where they live and work a better place.

Ruddington residents were finalists in three categories. The “Supporting the Local Economy Award” was won by Shamshad Walker, who works tirelessly to bring the business community in the borough together. She does this by organising networking events and using social media to share tips. 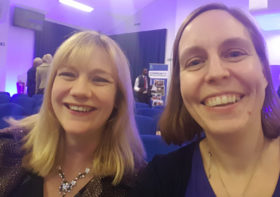 The “Enabling the Community Award” was won by Laura Ratcliffe, the founder of Ruddington Mums community group Facebook page. This page has grown into a source of local information and discussion for its 1,656 followers (both female and male), and also organises events and utilises local venues to enable its members to meet in the “real world”. Recently Laura has been helped by Gwen Eyre, both pictured.

In the “Supporting Young People Award”, our local dance school, Freedom Dance and Performance, was also a finalist. Well done to them all.