The major work which started in January to upgrade the lakeside Education Centre and its associated facilities in Rushcliffe Country Park is now complete. 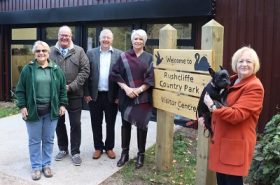 As the sun shone down on the morning of Wednesday 12th October, the Friends of Rushcliffe Country Park, Rushcliffe Borough Councillors and other invited guests were among those attending the official opening to see all the improvements. These include a permanent new café, the refurbished visitors’ centre and conference room, improved toilet facilities and additional landscaping.

Rushcliffe Borough Council (RBC) says the work carried out here is the first phase of a series of sustainable developments at Ruddington’s Country Park – incorporating key themes it identified during last year’s park users’ survey and in line with its Carbon Clever programme.

Coffee and Cake by the Lake is the site’s new café concession hosting a wide selection of teas, coffees, cakes and hot and cold light bites including “healthy option” foods and soups, paninis, toasted sandwiches, pasta pots and ice cream.

The multipurpose former Education Room can now also serve as a conference room, complete with integrated guest wi-fi, digital display screen and polycom device. This can also provide video conferencing facilities in a fully adaptable meeting space for up to 30 people. It’s hoped people will book this room for business away days, education purposes and environmental talks as well as by community groups for general use. 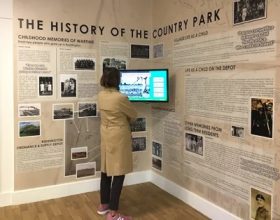 The visitors’ centre Atrium is now home to attractive new, wall-mounted displays plus a touch-screen history of the park. This series of four videos – charting key eras of its fascinating past – was financed by the Co-op Community Fund, compiled by the Friends with help from Ruddington History Society, and then produced by Ruddington-based media company North Point Productions (which runs RUDDINGTON.info).

In words, pictures and archive sound you can learn about the former farmland’s World War Two use as a bomb filling factory, its post-war conversion to an Ordnance Storage and Disposal Depot and then how most of the site subsequently became Rushcliffe Country Park.

The council reveals it also received grant funding from the Department for Levelling Up, Housing and Communities for a new Changing Place toilet facility in the centre, allowing park users with mobility challenges to change at the site more easily, “ensuring even greater access for those with profound and multiple disabilities”. This was supported by third party match funding by the Friends group’s fundraising activities in the park.

Cllr Brennan said: “These are exciting new facilities that will attract even more numbers to our wonderful park and we were very pleased to work with the Friends of the Park to ensure they were shaped with their members’ views in mind. Greener and more accessible and contemporary facilities mean even more people can enjoy the park, its features and surroundings, we know how many local people and visitors from further afield love its setting.”

She added: “The environment is a key priority for us and it’s fitting one of our flagship parks leads by example with ever more sustainable changes that will benefit all.”

The changes have also seen the installation of solar panels and an air source heat pump at the park which will supply sustainable energy to the new visitors’ centre. This follows decommissioning of the park’s wind turbines and biomass boiler last year – which were said to be less effective.

A relocated workshop – which used to be where the new outside café now is – has also enabled improved landscaping of the park to allow groups and families an even safer environment near to the new facilities. Ruddington-based company Artex Ltd will be donating further trees and hedgerows for this, before supplying volunteers to plant them all this November.

Ann Towle commented: “It’s wonderful that the park’s focus continues to be even greener and our volunteers have been supportive of these developments. The café, upgraded visitors centre and conference room, and the new toilets, are warmly welcomed and I’m sure will be appreciated by thousands of visitors from near and far.”