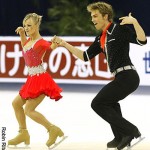 It is exactly a year ago since we last reported on Ruddington’s Penny Coomes and her partner, Nicholas Buckland from Wilford, and their continuing figure skating success. It was reported in the local press during December 2012 that they have now won the British Dance Championships – so very well done to Penny and Nick.