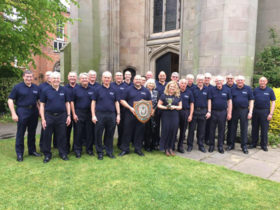 The South Notts Men’s Chorus will be returning to Ruddington after their successful concert with the Lyrical Songbirds at the Methodist Church in June.

They’ll be performing a Remembrance Concert, titled “A New Hope,” at St Peter’s Church on Saturday 11th November at 7:30pm. The Chorus will be accompanied by the wonderful female choral group Quadravox and the Derby Central Salvation Army Band.

The music will be suitable for the occasion and will comprise a sombre first half with pieces reflecting the horror of war and its impact on all of us. The second half will be more uplifting and include a mixture of traditional and contemporary pieces
highlighting hope for the future.