On Sunday 11th November, the Royal British Legion will hold a Parade and Service of Remembrance at the War Memorial. Weather permitting, the parade of local organisations will march to the War Memorial before the service. 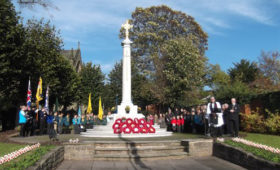 The service starts at 10:45am and will include prayers, hymns and the laying of wreaths at the War Memorial. The Last Post will be played at 11am, followed by two minutes silence. Afterwards, a Remembrance Service will take place inside St Peter’s Church.

As 2018 is the 100th anniversary of the Armistice, this year’s services are expected to be unusually busy. Members of the public who are driving to the service are asked to park considerately and arrive in plenty of time as road closures will be in place for the duration of the events.