Residents turned out in their droves to the Remembrance Parade and Service of Remembrance on Sunday 9 November to commemorate those killed in war. And the legacy of the brave servicemen and women is being passed down through the generations, with representatives from the Cubs and Brownies of Ruddington marching in the parade and acting as wreath layers and flag bearers. 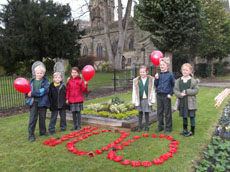 “We’ve been involved with the parade for as long as I can remember – and I’ve been doing Brownies for 35 years,” says Brown Owl Gina Eyre of the Third Ruddington Brownies. “We talk to the girls beforehand so they know what it all means – it’s important they understand we are remembering people killed in war. Of course we now remember those from more recent wars as well as the First and Second World Wars. I was very proud of the children, they all behaved beautifully and respectfully, both outside and in the church.”

The Cubs were also represented, and a sign of our growing village population was evident in the numbers of young people in uniform this year.

“When I first got involved with the First Ruddington Cubs we struggled to get enough young people together to hold the flags and lay the wreaths,” says leader Caroline Crabtree. “This meant we’d have had attendance of around 15 young people. To go from that to having to squeeze five Cubs into four seats in church is an impressive turnaround, and is testament to the hard work and dedication of the volunteers who run each section.”

The children involved enjoyed the morning and participating in the parade and service:

“I was very nervous because I wanted to do it right, and I felt very lucky to be involved.” Ruby Gow

“I felt very proud because everyone was watching us marching in our uniforms.” Chloe Budd

“It is my first year with the Brownies and I enjoyed marching and being part of the parade.” Lola Garrett

“It felt nice for everyone to remember all the soldiers that fought and died in the war.” Aoife Katon

The road was filled with a record crowd at the War Memorial on Sunday 9th November for the Remembrance Day service, a century after the outbreak of World War 1.

The mayor of our twin town in France, Christian Champire, laid flowers with the Parish Council representative, Councillor Peter McGowan. Wreaths were laid by the British Legion, Rushcliffe Borough Council and all the uniformed organisations.

A service followed in a crowded St. Peter’s Church where all three local ministers took part in the service. 61 names from the First World War are on the War Memorial and the names of the 6 that died in the first year of the war were read out.

Parish Councillor Peter McGowan returned to France with Grenay’s Mayor for their Remembrance Day commeration on 11th November. He laid wreaths at each of the war memorials including the British Cemetery in Grenay. He was also present at the official opening of a new memorial at Notre Damede Lorette near Arras in memory of almost 580,000 men who died during the War.