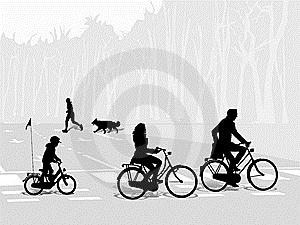 “I was alarmed by some of the views expressed in the “On yer bike” article in May’s Newsletter.  The overall thrust of the piece, i.e. questioning the implementation/use of the shared Cycle-Footpaths on Wilford Road and Clifton Lane, is a reasonable argument that I agree with. It is wrong, however, to imply that cyclists should not use the road – cyclists have every right in law to do so and, need it be pointed out that cyclists (like everyone else) fund the roads through their Council Tax payments?  Also, when there is a choice between riding on a poor cycle path (blocked by parked cars, bins, etc) and the road, it is often safer to use the road. Another unfortunate sentence in the piece referred to “Driving on our village roads can be tricky…but with the addition of (often wobbly) cyclists in the middle of the road, it can be downright dangerous” – the majority of cyclists I see on our roads are reasonably, or very, competent.  I do see some younger cyclists riding on pavements and at times a little carelessly but it seems very unfair to label all cyclists as dangerous. I’m sure the piece was intended to flag up some of the writer’s unpleasant experiences, but it came across as an attack on cyclists generally, which is unfortunate. Local cycling organisation Pedals works to engage with the authorities on issues such as cycle lanes, but of late there has been little response from some local authorities.  Perhaps the writer would like to join me on one of the bike rides that I am organising this year? Hopefully she could see another side of cycling. (Julian Bentley Accredited Cycle Instructor & Driving and Motorcycle Licence Holder)
*Editor’s note: Julian Bentley was not the only reader to express an opinion on this article. We have received a number of responses with a variety of opinions – not all of them agreeing with either Faye who wrote the original item, or with Julian. Thanks to everyone who took the trouble to write / email – many of the responses have been forwarded to NCC Highways Department.