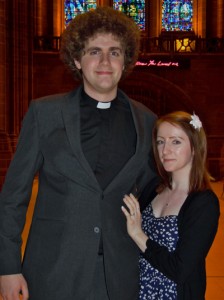 Sunday June 28th was a very special day for the Reverend Simon Rose, minister of our Methodist Church and of the churches in Keyworth and Bradmore. Simon came to Ruddington as a probationary minister in July 2013, newly married to Sarah and making their first home together on Loughborough Road.

Simon’s first ministry has been very well received and on June 28th he was ordained in Liverpool Cathedral along with twelve other new ministers.

Members of his congregation at all three of his churches travelled by coach and by car to be with Simon on his special day. The cathedral was started in 1904 and not completed until 1978. One of the largest Cathedrals in the world, it provided an imposing setting for this special occasion. The joy Simon experienced at this momentous time in his life was very plain to see and was shared by those of his congregation who attended.