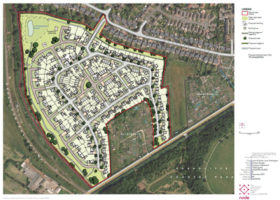 Last December we reported how Space Foods Ltd had decided to appeal to the Planning Inspectorate against Rushcliffe Borough Council’s refusal to allow it outline planning permission for 175 new homes on Green Belt land it owns south of Musters Road – with access off Asher Lane.

Those proposals were lodged in January 2017 – after a previous application for 250 houses on the same site was withdrawn two years earlier.

1) Noise. The developers didn’t indicate how they would deal with the noise coming from the Premier Pets’ Hotel kennels and the impact this would have on residents.

2) Location. The site is located within the Green Belt, where development of the size proposed is felt to be inappropriate.

3) Traffic. RBC objected on the same grounds as the Parish Council. It was felt that the developers hadn’t provided enough detail to effectively mitigate the potential traffic problems that the development would cause.

Ruddington residents’ groups, Ruddington Parish Council and many individuals also spoke out against these original plans via both the planning portal and social media. The Public Inquiry into RBC turning down outline planning permission is due to be held on Tuesday 17th to Friday 20th April 2018. 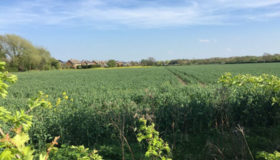 Meantime, it’s been revealed that, last year, Space Foods purchased 75 Musters Road when it came up for sale, with a view to demolishing it. This would appear to be an attempt to mitigate the previous traffic objections by gaining access via a new road from the north of the site instead. Vehicles would then have the option of entering and exiting via Distillery Street and Sandhurst Drive as well as going via Asher Lane and Musters Road. The outline plans also promise pedestrian links, public open space, car parking, landscaping and drainage.

The reference number for the latest Space Foods application is 18/00300/OUT. You can see full details of the revised plans and comment on them at www.rushcliffe.gov.uk/planningandgrowth. You have until Thursday March 8th to do so.

Editor’s Note: Even if you commented on the original Space Foods application, you’ll need to comment again for your views to be considered in relation to the new application.