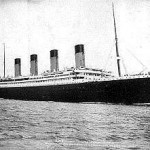 One hundred years ago, in the early hours of April 15th 1912, the RMS Titanic sank in the North Atlantic following a collision with an iceberg.  Of 2223 passengers and crew on board 1517 perished.  One family in Ruddington was particularly affected by this tragedy. The only sister of Thomas Andrews Jr, the chief designer at  the Belfast ship builders Harland and Wolff, lived in the village. He was lost on the fateful maiden voyage. 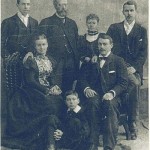 Eliza Montgomery Andrews was married to Lawrence Arthur Hind, a Nottingham solicitor and son of Jesse Hind of Edwalton Hall. The Northern Whig, April 27 1906, reported that their wedding at Comber, Co Down was attended by a “very large and fashionable congregation”. On the 1911 census the family are living in Manor Park with their two young daughters Eileen and Edith. Lawrence Hind MC, 38 year old Lt. Colonel of 1/7th Sherwood Foresters, is remembered on the War Memorial in Ruddington and at Comber. He died on 1st July 1916, on the Somme battlefields in Northern France.
Photos – Wikipedia. Titanic & Andrews Family 1895. Eliza Montgomery (known as Nina) standing behind her brother Thomas.   (By Kay Steer)