Ruddfest 2016 was another runaway success, with hundreds of thirsty punters flocking to the village in search of the 150 beers and ciders on offer (not to mention a fair few gins).

The Friday and Saturday nights were especially well-attended with all four venues – The Green, White Horse, Frame Breakers and Victoria Tavern – packed to capacity. 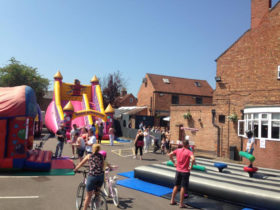 In between tipples, festival-goers were entertained by a variety of live acts, including a line-dancing performance on Thursday night.

Saturday afternoon saw the Knights of Nottingham touring the village on their magnificent horses, whilst a bouncy castle on The Green and a Family Fun Day at The White Horse on Sunday kept the kids happy.

Chief festival organiser, John Noble of the Three Crowns and Bar Six, comments: ‘We may not have had the best weather this year – except for the Sunday which was scorching! – But what a fantastic event Ruddfest 2016 was. 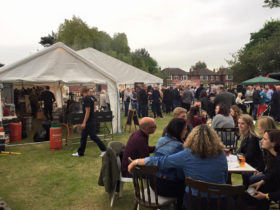 “We even ran out of beer on The Green on Saturday night! Thanks to everyone who attended and helped organise the festival – bring on Ruddfest 2017.“