This card is the first of its type in the UK outside London, which has had its ‘Oyster’ cards for a few years. Valid on the tram, NCT, Pathfinder, South Notts, Linkbus and Kinch Bus services locally, as well as Trent Barton a little further afield. The card is free to get. You then have to load it in multiples of £10, and each journey is 10% cheaper than the price of the cheapest ‘ordinary’ ticket.

Kick-started by a £2.5 million investment from the Department of Transport, the Robin Hood card automatically gives you the cheapest fare for travel and is intended to make getting around Greater Nottingham cheaper and easier. It is planned that other bus companies and East Midlands Trains will soon be on board.

It is simple to use. Just present your Robin Hood card when you board. Once only, don’t do it again when you get off. Cards are available at tram stops and from the new Robin Hood smart card machines across the city. If you have any credit on your card you can travel, but cards that have a negative balance will have that made up when the card is next topped up. 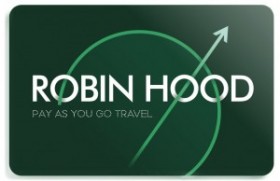 Cards such as Mango (Trent Barton), Kangaroo and CityCard are likely to be phased out in due course, although the Mango may be retained for use outside the area covered by the new Robin Hood card.

Although there will be changes and refinements to the scheme to come, I didn’t think it would happen before Xmas. It has and so huge congratulations to those responsible, it is a major coup for public transport locally. The Robin Hood card promises a bright future for integrated public transport across the conurbation.

Keep an eye on the Council website for something else exciting and very useful for Ruddington public transport users.