Owning a dog brings with it certain responsibilities and none more so than when that dog leaves the confines of its own home/ garden and is taken out into a public place.

Dogs should always be on a lead as they are walked and exercised around our village streets. In certain areas they may be allowed off their lead but they should always be kept in sight and under control at all times.  The majority of owners go out armed with bags and carefully monitor their pet and when it requires a “comfort break” they diligently bag the deposits. If owners forget their bags there are various dispensers around the village, particularly in the playground/ park areas.  Red coloured specific dog waste bins are also situated throughout the village but it is fine to use any bin. “Bag that poo- any rubbish bin will do”

So why is our village peppered with piles of dog dirt?

The footpaths, alleys, green spaces and recreational areas all seem to have been attacked by this blight. If the majority can be bothered to be responsible and considerate owners why can’t every owner? 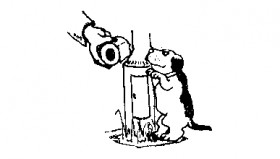 The two local schools actively encourage families to walk, scoot or bike to school but on numerous occasions parents/ carers report that wheels and shoes have been covered in dog dirt. It also impacts on other residents of all ages.

Feelings within the village are very high at the moment about this unacceptable situation caused by an inconsiderate minority. Parents/ carers are very concerned about the possible implications of young children getting dog faeces on themselves which in the worst case can lead to blindness due to an infection called Toxocara canis.  They are determined to identify, name and report the offenders to the Borough Council.  With the advent of modern technologies e.g. mobile phones the resources are now readily available to record and report anything they observe.

Rushcliffe Borough Council is our local enforcement Authority for all things to do with dog ownership.  They have the powers to issue spot fines of £50 or a fine of up to £1000 on prosecution if a dog is allowed to foul in a public place and the owner fails to clean it up straight away.