We were promised that RuddFest 2014 would be the biggest and best to date – and if the record attendance figures and rave reviews on social media are anything to go by, we weren’t disappointed. This year’s event, which ran from Thursday 29 May to Sunday 1 June, saw a number of twists on the traditional beer festival theme. These included a selection of English wines from local bistro McArtneys and the biggest programme of live musical entertainment seen to date at The White Horse. 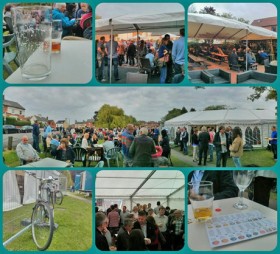 The joint offering proved a huge success, with hungry punters treating themselves to a homemade pakora or samosa, or one of McArtneys’ popular 22cm ‘beerdogs,’ after tackling the array of beers and wines. Despite dismal weather at times, the marquee was well-attended throughout RuddFest, with large crowds in evidence on Friday evening and all day on Saturday.

The beer garden at The White Horse was also consistently packed over the four days. Crowds of music lovers descended on the pub to enjoy live acts ranging from the Dolphin Morris Men to well-known Oasis tribute band Definitely Maybe – accompanied, of course, by a glass of real ale or cider and a snack from the barbeque.

Elsewhere in the village, pies and mushy peas were available at The Victoria Tavern to wash down their array of beers and ciders, whilst The Red Heart offered an all-day barbeque and coverage of the Froch v Groves fight on the Saturday. This was followed by a lower key Sunday, with an acoustic set from Red Heart regular, John Rockliffe.

All the publicans and restaurant owners involved in RuddFest 2014 would like to thank everyone who came to and supported the festival, and helped to make it the best so far.