Ruddfest, Ruddington’s annual beer and cider festival, will be making a welcome return in June 2016, with over 150 tipples on offer for thirsty visitors to enjoy. This year’s festival starts at 12 noon on Thursday 2 June and runs through to last orders on Sunday 5 June. Six village venues are taking part, with The Three Crowns, The Three Spices and Bar Six once again operating from a marquee on The Green in the village centre. 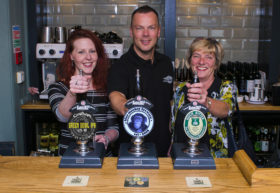 Pictured (left to right) Amy Cameron, John Noble and Lindsey Flint get the pints in at The Frame Breakers, in readiness for Ruddfest.

A new entry to this year’s festival is The Frame Breakers, formerly The Bricklayers’ Arms, on Ruddington High Street. Acquired by Nottingham Brewery in 2015 and now managed by Amy Cameron, the pub is fast making its mark on the local real ale scene and is looking forward to taking part in its first ever Ruddfest. Completing the field for 2016 are festival veterans The White Horse on Church Street, and The Victoria Tavern on Wilford Road.

As in previous years, the festival will be celebrating local products, with many of the ales and ciders sourced from East Midlands breweries including Castle Rock, Shipstone’s, Navigation, Nottingham Brewery and The Bottle Kicking Cider Company, to name just a few. In a departure from tradition, gins from near and far will be showcased at a gin stall at The White Horse and also at a purpose-built ‘Rudd-gin-ton’ gin bar inside the marquee on The Green.

Food is set to play a big part in Ruddfest 2016, with options to suit all tastes and appetites. This year’s culinary fare includes Indian snacks and curries from The Three Spices, and barbeques from both Bar Six and The White Horse. The latter will also be running their usual food menu, plus pizzas by the slice from their wood-fired pizza oven. Snacks and main meals, many featuring local ales and ciders, will be available at The Frame Breakers, whilst Lindsey Flint will be serving up mushy peas, samosas and snacks at The Victoria Tavern.

Festival organiser John Noble, from Bar Six and The Three Crowns, said: ‘There’s something for everyone at this year’s Ruddfest. A packed entertainments programme kicks off on the Thursday night with live music at The White Horse and another festival “first” – a Barn Dance on the Green, courtesy of the Lockton School of Dance who are based in the village. We’re also hoping the Knights of Nottingham will make an appearance with their horses, offering a great photo opportunity for festival punters as they parade around the village.’

As usual, there’ll be a variety of music acts performing on The Green and in The White Horse garden throughout the festival, with artists booked so far including Motown Goldrush, Steve McGill and The Rolling Clones. White Horse landlord Andy Hunt is also offering two open mic sessions on the Friday and Saturday for punters wishing to display their musical talents, whilst a bouncy castle on The Green will keep the kids entertained.

Says John: ‘We’re still finalising the entertainments programme, so keep an eye on the Ruddfest Facebook page for the latest news and event timings. You’ll also find information at each participating pub’s own website and social media pages, and at the official Ruddfest website, www.ruddfest.co.uk. And look out for the beer and cider lists, plus tasting notes, for each venue, which will be published nearer the time.’

Please visit the following websites and Facebook pages for more information about Ruddfest and each participating venue:

The Three Crowns / The Three Spices