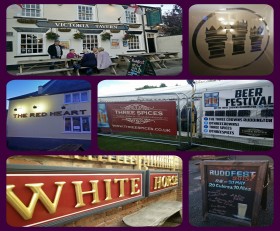 The last weekend in May saw hundreds of real ale enthusiasts descending on the village for Ruddfest, making the 2015 beer festival the biggest and best to date. Four pubs took part this year: The White Horse, The Three Crowns, The Victoria Tavern and The Red Heart, as well as Bar Six and the Three Spices.

Despite some mixed weather conditions over the four days, punters flocked to all the venues and packed out the marquee on the Green – bringing a real buzz and festival atmosphere to the village. In total, over 100 real ales, ciders and perrys from more than 50 breweries were on offer, along with live music, barbeques and Indian food.

Andy Hunt, Landlord of The White Horse, commented: ‘What a success for Ruddfest 2015! We sold out of beer and got even better feedback than last year, which we didn’t think was possible. Thank you to all the local people who make it a growing success. The only downside to this year is the sad loss of The Red Heart. I would personally like to thank Rahul & Bav for all their efforts over the years that have helped make Ruddfest what it is today.’

Max Harman, Landlord of the Three Crowns, added: ‘Wow, what a beer festival! It was great to see new faces and more families enjoying the bouncy castle on the Green. The feedback for the live music was that everybody loved the selection and just want more next year. None of this would be possible if it wasn’t for the people who turn up and enjoy themselves, so it’s a HUGE thanks from John and me. I assure you that next year we’ll continue to build on the success of Ruddfest and make it even better than before!’

In other pub-related news, Nottingham Brewery has recently acquired The Bricklayers’ Arms and is promising a ‘new and improved’ experience for clientele in the coming months. Given Nottingham Brewery’s real ale heritage, it’s also realistic to expect that The Brickies will be filling the gap left by The Red Heart in next year’s Ruddfest. Roll on 2016!