It’s celebration time at Ruddington Bowls Club as members prepare to mark the organisation’s 90th anniversary in May. Established in 1924, the Club moved to its present home at Elms Park in 1932, where matches are played on the green behind the cricket pavilion.

But whilst the Club will be celebrating with a special 90th birthday celebration and open day on 11 May, what they’d really like to see is an influx of new, younger, members. 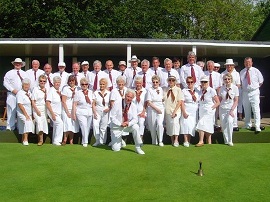 Numbers have declined in recent years, with just 50 people expected to re-join this season. And in January 2014, the Club launched an appeal to attract younger players through the Nottingham Post – stressing the historic importance of the Club as part of the Ruddington sports scene, and emphasising the fun and social opportunities that membership offers.

Speaking to the Post, Club Secretary Fran Dent said: ‘Bowls has a very fuddy-duddy image but it really isn’t like that. It would be great to get some younger people to take part. Absolutely anyone of  any age can play. People should come and have a try – I’m sure they will like it …It’s a therapeutic game and has a fantastic social side.’

Ruddington Bowls Clubs has both men’s and ladies’ teams which compete in several local leagues, playing to both EBA and Federation rules. There are also a number of friendly matches, both singles and pairs, throughout the season which offer a great opportunity for new members to gain experience in a relaxed environment.

Come along to the Open Day at Elms Park on Sunday 11 May between 2:30pm and 5pm. All equipment will be provided and it’s completely free – so there’s no reason not to give it a go!

If you’d like more information in the meantime, please contact Mrs Fran Dent on 0115 914 6707 and leave a message, or visit www.ruddingtonbowls.webspace.virginmedia.com. The bowls season runs from 1 May to 30 September.