Congratulations to Ruddington Community Choir – who’ve managed to secure funding for a “Community Choirs’ Festival” in our village!

This comes after the public were invited to vote for them online for a share of the Aviva Community Fund – set up to offer support and funding to “inspirational local projects” in the community. Over a thousand people did. Now the choir is set to receive up to £1,000 to stage their event. 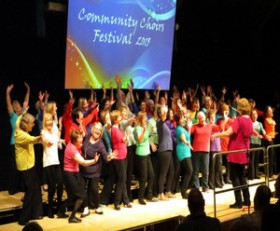 Ruddington Community Choir was formed in March 2012, inspired by Gareth Malone’s Military Wives’ choir series on TV. Musical director Bernie Bracha had a dream to start this choral group. Her aim was to benefit the singers but also to encourage and inspire the local community. She also hoped to bring together different people in a joyful and uplifting experience.

Over the last three years the choir has gone from strength to strength with forty members aged from their mid-twenties to seventy plus. They’ve performed at several venues in the village – including The Framework

Knitters’ Museum, Ruddington Methodist Church and James Peacock School – and helped raise funds for numerous charities. Their next big adventure is in October when the choir travels to Grenay, Ruddington’s twin town, where the singers will take part in a festival to celebrate 30 years of The Twinning Association.

Now it’s hoped the Community Choirs’ Festival will bring other similar groups to perform in Ruddington early next year. The Aviva funding will be used to pay for venue hire as well as sheet music, rehearsal time and space, advertising and flyers, signage, refreshments, lighting and decoration. They’re also hoping to have some festival T-shirts printed, promoting Aviva as a sponsor.

Bernie told us “The choir is about so much more than singing, and it is the true sense of community which makes our choir so special. We aim to provide a festival of workshops and performances in various venues throughout the village, putting Ruddington firmly on the musical map!”