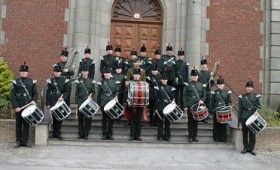 On the steps of Foncquevillers Village Church, France

The Ruddington Detachment of the RHR Corps of Drums recently returned from their annual parade at Gommencourt & Belgium. They played and marched into the Menin Gate and when their turn came, the Corps played their regimental call & “Charlie Reveille” note perfect and then fell back and marched off with their heads 20ft high. They had so many requests for encore that they formed up and played at the side of the Gate on the pavement and were immediately asked back next year by the Last Post Association President.

Russ Jones, SMI Bugle Major said that one of the Buglers, an elderly gent awarded the B.E.M. and aged 86 years, said “I have played here every night except two for the last thirty six years and your cadets are the finest I ever heard and seen.”
Cadets are aged from 13 – 18 years old and anyone wanting to know more about joining can ring Major Russ Jones on 0773 956 3588 for more information.