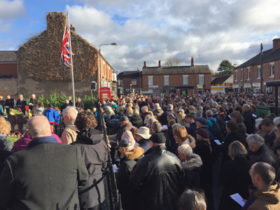 On the 100th anniversary of the end of the First World War, Ruddington paid a heartfelt and moving tribute to the 61 warriors from the village who gave their lives in the service of our country. Just as the guns had fallen silent at 11am on 11th November 1918, so too did the hundreds of people massed around the War Memorial on Church Street, who’d come to remember the fallen.

The ceremony included bell-ringing at St Peter’s Church and a flag parade by local organisations. It was lovely to see so many young people taking part in such an important event. There were hymns and prayers led by Reverend Sam Hackett of Ruddington Baptist Church, wreath-laying which was begun by the Ruddington Royal British Legion and included flowers laid by Cathie and Nicolas, visitors from Grenay, our twin town in France. And, of course, the playing of the Last Post. 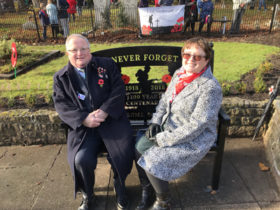 The final act in the Memorial Garden was the unveiling of a new bench marking the centenary of the armistice, commissioned by the Parish Council. This was done by Councillors David Hall and Jill Reedman.

The commemoration then moved indoors into St Peter’s Church, where Reverend Andrew Buchanan conducted a Service of Remembrance.

Whilst our tribute was taking place here in Ruddington, Twinning sub-committee members Ernie and Doreen Gadsby and Paul and Ann Tarlton-Weatherall went to Grenay to represent us at the French 100th anniversary memorial. As expected, the weekend was a very moving yet enjoyable affair.