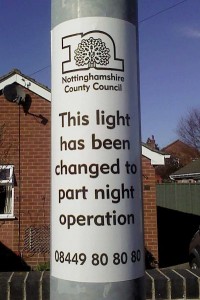 You might not have noticed yet – unless you’re up or awake in the early hours – but a large part of Ruddington now goes DARK during the night! It follows a consultation with village residents late last year on plans to switch off many of the street lights in our village overnight. Notts. County Council was aiming to save 25 per cent of previous energy usage by turning off some lighting between midnight and 5.30am. As a result of concerns from villagers the switch-off hasn’t been quite as extensive as originally planned – with lights on Clifton Road and around Church Street and The Green now remaining lit whilst ever it’s dark.  This is in addition to our other main through-routes along Wilford Road, Easthorpe Street, Kirk Lane and Loughborough Road. Certain other clusters of overhead lights are unaffected where they are along public footpaths, away from roads or in areas of sheltered accommodation. However nearly all our estate roads are now going dark in the early hours. Lamps with part night operation have been clearly labeled for information (see photo).  But there’s also a Ruddington map available, showing all the street lights affected, which can be downloaded from the www.nottinghamshire.gov.ukweb site.                (By Graham Wright)