It’s been a busy Christmas and New Year period for Ruddington’s pubs – as three of them have just changed hands in as many months. What’s more ALL THREE are also promising regular “live” music to pull in the punters!
First up, after a long period of closure – and eventual repairs and refurbishment – The Bricklayers Arms reopened its doors to drinkers on Friday 11th November.  It’s now in the experienced hands of mother and daughter team Carol & Brenda – who hail from Great Yarmouth.  Carol has been managing pubs for 18 years but hopes to become a permanent fixture in Ruddington.  Real ale can now be found on the bar for the first time in a decade – and monthly Karaoke is on Sunday afternoons plus a new monthly Wednesday “Open Mic” night starting on the 15th February.  Despite the lengthy closure we’re told many of the old regulars quickly returned – but with lots of fresh faces enjoying the Sky Sports TV and new “Card School” on Sundays.  They’re also looking to join the local Pool League.
Secondly, since the 5th of January, Natalie Toplis has been welcoming locals at The Jolly Farmers.  Originally from Chesterfield she’s taken on the five year licence to reintroduce some “life” and “Jolly good food” to the pub “and, yes, we will be repairing the signs!”  The interior is also set for a bit of a makeover after which Sunday and midweek carveries will be available along with a full general menu.  The rear function room is now being offered for FREE hire – with disco and buffet available.  And, as well as the established disco and karaoke nights on Wednesdays and Fridays, there’s new “live” music – with singer Tony Beltz starting things off on the 18th February. 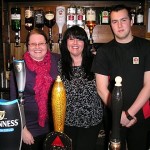 Thirdly, it looks like “live” music is also back on the cards at The Victoria Tavern.  Bhavna Patel – whose family also runs The Red Heart – has just handed over the keys after 18 months there. Locals gathered to wish her a fond farewell on the 23rd January. Following a period of uncertainty for staff and customers the new lease was taken on by Enterprise Inns entrepreneur Harry Kelly the following day – adding to his chain of around 60 pubs.  He has kept on four staff members including newly appointed manageress Sarah McCree (pictured centre), chef Colleen (left) and Sarah’s youngest son Joe (right). (By Graham Wright)