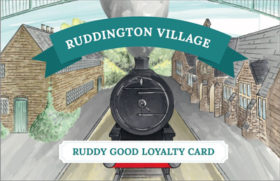 An exciting new initiative to encourage more residents and visitors to use our village centre shops, pubs, cafés, restaurants, takeaways and other traders will launch at the start of October. The Ruddington Loyalty Scheme comes as high street retailers everywhere are facing more challenging trading conditions in these increasingly internet-dominated times.

The introduction of the village loyalty card was on the agenda at a special meeting for local businesses on Tuesday 18th September, organised by the recently formed Ruddington Village Centre Partnership (RVCP). It was hosted by Julie Smith from The Black Cat Café, Ruddington Postmaster Soham Patel, Sally Beards of Phoenix Flowers and Parish Councillor Mark Pinks. The gathering was to tell village retailers more about the new card – but also to get feedback on other proposed RVCP initiatives to increase footfall on High Street and Church Street. Ideas include occasional late night opening, a regular market on The Green and freeing up more daytime parking spaces for shoppers. 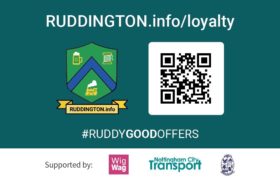 The launch of the Loyalty Scheme and its promotion have been funded initially by Ruddington Parish Council, with the dedicated card designed by Ruddington-based creative agency, WigWag, and based on their popular Village Gateway signs. This card will be FREE to pick up by anyone who shops, drinks, eats or uses services here. It will then be useable at all the retailers in Ruddington who have agreed to join the scheme by promising to have monthly #RUDDYGOODOFFERS for their customers – in the form of a discount or other loyalty bonus.

RVCP Chair Mike Ader said: “The Loyalty Card is the first initiative by the Ruddington Village Centre Partnership and I’m delighted that over two dozen Ruddington businesses have already signed up. I would like to think that Ruddington residents will want to actively support these businesses, and thereby the village, by using their loyalty card regularly!”

The Ruddington Loyalty Scheme is set to run for an initial trial period of three months up to Christmas. If it proves successful then it’s hoped funding can be found to keep it running indefinitely.

Look out for details of all the participating traders and their monthly offers coming soon to the RUDDINGTON.info and Ruddington Parish Council websites.