Mike Robinson from Ruddington will be tackling a 52 mile walk to raise money for Sense, the national deaf blind charity.

48 year old Mike will be taking part in the Sense RidgeWalk on 18 June, a cross country hike following the Ridgeway, the oldest and one of the most scenic national trails in the UK. The hike which has to be completed in 24 hours, starts at midday and involves trekking throughout the night in order to cross the finish line by midday the following day. 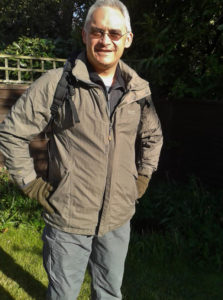 Mike was inspired to take part in the event and raise money for the charity in memory of his stepfather Rob Robinson who was a long time supporter of Sense following the birth of his grandson Matthew who is blind.

Mike is no stranger to a challenge and often takes on two marathons a year. As part of his training he has been completing regular short walks around Rushcliffe Country Park with his dog Rocky.

Mike is aiming to raise £500 for Sense, the funds raised will help deaf blind children and adults overcome the isolation that they face on a daily basis and enjoy some of the things that most people take for granted. To sponsor Mike please visit: http://uk.virginmoneygiving.com/MikeRobinson666