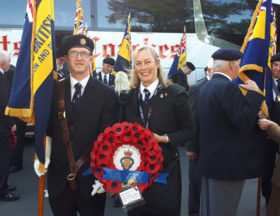 On Wednesday 8th August 2018, Ruddington Royal British Legion (RBL) Branch Secretary Louise Mote and Standard Bearer John Pidgeon participated in the Great Pilgrimage 90 (GP90) event in Ypres, Belgium. The pilgrimage was made in recognition of a similar march made 90 years earlier to the day by war widows and veterans

RBL members were able to take a tour of the battle fields where they gained shocking insights into the reality and horrors of the First World War. Whilst the temperatures were otherwise up in the mid-30s, it was cooler on the day of the parade, with a breeze.  The band of the Royal Marines played them in along the two mile march route to the Menin Gate, where wreaths were laid.

The Branch is tremendously grateful to Ruddington Parish Council and the various local companies who gave donations to meet the cost of participating. These were Ruddington Grange Golf Club, Grange News, Simply The Best Caterers, The Frame Breakers and Right Management.

Louise, who also held a fundraising afternoon tea party, said “I can’t begin to explain what an honour it was to represent not only the Ruddington British Legion but also the village at this event. 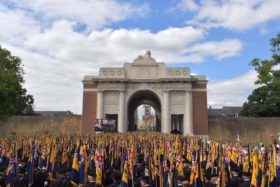 “The organisation was phenomenal, co-ordinating over 2,000 people in searing temperatures, and arranging transport, packed meals and security. The itinerary was outstanding and many good friendships were made on the tour”

The event was typical of the Royal British Legion: welcoming and inclusive with friendly people aged from 18 to over 80 all enjoying themselves, supporting each other and recognising what tremendous sacrifices others have given and continue to give.