The driving force behind a Ruddington nature reserve is among the winners of this year’s Celebrating Rushcliffe Awards.  For 2021, a physical ceremony returned – and was held on Wednesday 8th December at Rushcliffe Arena. 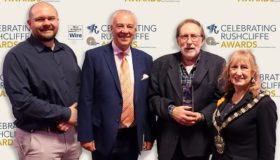 Gordon Dyne, Chair of the South Notts Local Group of Nottinghamshire Wildlife Trust, received recognition for his conservation work at Wilwell Farm Cutting Nature Reserve. Gordon is pictured above receiving his trophy from (L to R) Tom Holodynsky of Great Northern Group, Leader of Rushcliffe Borough Council Cllr Simon Robinson and Mayor of Rushcliffe Cllr Sue Mallender. Whilst he’s delighted with his Pride of Rushcliffe Award, Gordon was keen to point out that it’s very much a community effort.

“Much of what I do is about promoting wildlife and nature conservation in Rushcliffe,” explained Gordon. “Indeed, I would have achieved very little at Wilwell Nature Reserve with the South Notts Local Group, or with the Nature Conservation Strategy, if other folk hadn’t been prepared to join in; turning up for work parties, helping organize events (or turning up to them!) or joining in the inevitable committee meetings.”

He added: “Whilst much of what I do is volunteering, my time working for Wilwell Farm Cutting itself is a hobby. It is a quite an enclave on the edge of Ruddington Parish (a bit muddy in winter) but is particularly lovely in the spring and summer as the variety of wildflowers come and go. In a typical year I can record some 120 to 125 species, never mind the trees, grasses, moths, butterflies and who knows what other insects. It is a wildlife island to be protected and, hopefully, reconnected with other local sites.”

Also recognised from Ruddington was Paradise Allotments off Wilford Road, which won the Health and Wellbeing Award. As previously reported, the team have worked hard to transform the allotment to create a tranquil and calming space for the local community.

The Rushcliffe Social Prescribing Group run a plot here which has received funds and generous donations from various sources. The space itself was donated by Ruddington Parish Council to give those at risk of social isolation or loneliness – including people with physical health conditions as well as mental health issues – a quiet space to socialise, learn about gardening and meet with likeminded individuals.

Allotmenteer Sheena Gibbons said: “Our desire is to really make a difference to people’s lives, however small – not only helping them with their mental wellbeing but their physical wellbeing, too.” Mandy Fletcher added: “We were very pleased to win the award as it means all the hard work from patients, staff and allotmenteers was worthwhile.”

Cllr Robinson led the praise to all those shortlisted for a Celebrating Rushcliffe Award and to the many local sponsors who supported the accolades. He says: “Many congratulations to our winners and to all those who were shortlisted and nominated. Gordon’s story is just one wonderful example of the incredible spirit across the Borough and chimed so well with our environmental priorities as a Council.

“The event highlighted so many who give so much to their community, group or organisation and particularly in what has been such another tough year for so many of us.”

He added: “Whether volunteer, business owner or community hero, they are all making a difference to people’s lives and are hugely deserving of this recognition. Thank you to everyone who nominated a group or individual; it was wonderful to celebrate their achievements.”