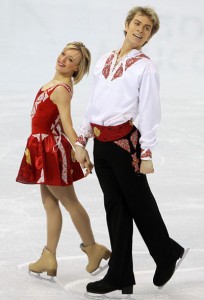 Earlier this year a Ruddington resident, Penny Coomes, along with her partner Nicholas Buckland, who comes from Wilford, competed in the Winter Olympics in Vancouver as Figure Skaters. They finished a very credible 20th overall. After the event, an unprecedented review was held after the audience booed the judges for not scoring their Irish Dance Routine enough. It was agreed that they should have been scored higher but the decision had to stand.
The couple met when they were at the Becket School and have been skating together since 2005. They are both students at Trent University but their studies are currently on hold as they are splitting their time between America and Nottingham. In America they are training with Evgeni Platov, himself a two times Olympic Champion and when in Nottingham they train at the National Ice Centre. With costumes costing up to £800 a time and each of the 3 sections of the competition, requiring  a different outfit  securing financial support is an ongoing task.
Luckily, some help is close at hand as Penny and Nicholas have her stepfather, Philip, who coaches them and he also choreographs the dance routines for the couple.
Penny’s mum, Jane, is very proud of her daughter but does  wonder where the talent comes from as she also has a son who is an elite gymnast and a daughter who aspires to be a footballer! We wish Penny and Nicholas continuing success.